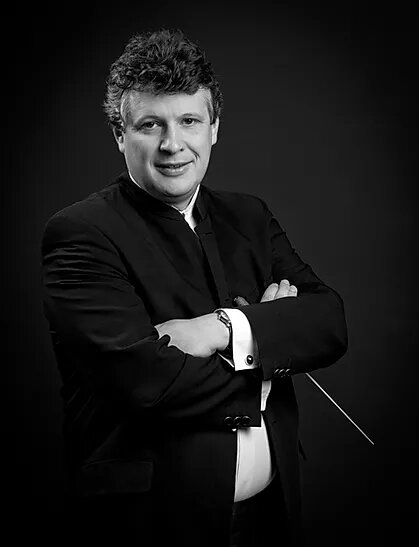 Alexander Walker’s career has taken him all over the world. He is a regular guest conductor with the legendary Russian State Symphony Orchestra whom he has conducted in concerts at Moscow’s Tchaikovsky Hall, and International Performing Arts Centre. Appearances during the last couple of seasons have included concerts with Prague Philharmonia in the Dvořák Hall of the Rudolfinum the Belgrade Philharmonic, Belgrade Strings (broadcasting on National Television with them), the Georges Enescu Philharmonic, Bucharest, North Hungarian Symphony Orchestra, Wrocław State Symphony Orchestra, Symphony Orchestra New Russia (Music Director: Yuri Bashmet) and the Russian Philharmonic. In November he made a highly successful debut with the English Chamber Orchestra at London’s Cadogan Hall. Also in the UK, he has conducted the City of London Sinfonia and the BBC Philharmonic (with a concert broadcast on Radio 3) and has been developing a relationship with the Royal Philharmonic Orchestra with whom he has recorded and given concerts, and recently conducted the prestigious Elgar Birthday concert in Malvern. His recording of the complete violin repertoire of Ignatz Waghalter featuring the virtuoso violinist Irmina Trynkos with the orchestra on Naxos has received critical praise and was awarded a Supersonic Award by Pizzicato Magazine and was nominated for an International Classical Music Award. In May his recording of Havergal Brian’s Symphonies nos 22-24 with Symphony Orchestra New Russia was released on the same label in May and went straight to no. 5 in the Specialist Classical Chart and was nominated Critics’ Choice in Gramophone Magazine.

Highlights of the last couple of seasons have included a performance of Britten’s War Requiem to mark the 70 years since the invasion of Poland in Lublin, Poland and the first ever production in Turkey of an Opera by Benjamin Britten, conducting The Turn of the Screw for the Istanbul State Opera. In 2011, he conducted the first production of Julian Grant’s new opera Prophet and Loss for Oundle International Festival.

After completing a music degree at Bristol University and post-graduate studies at the Guildhall School of Music and Drama in London, Alexander Walker studied with Ilya Musin at St. Petersburg Conservatoire and has since performed throughout the former Soviet Union where many of his concerts have been broadcast on National television and radio. He was Principal Guest Conductor of the Voronezh State Symphony Orchestra from 1999-2004. He is a regular guest conductor with the Mikkeli and Lappeenranta City Orchestras in Finland, and of the Esbjerg Ensemble and the Vestyjsk Sinfonieorkester in Denmark and of many orchestras throughout Poland, the Balkans, Turkey and Romania. In the UK, his engagements have included concerts with the New Queens Hall Orchestra and the Russian Orchestra of London.

He works regularly at the Royal Opera House, Covent Garden, and has toured with the Royal Ballet to the Bolshoi and Mariinsky Theatres in Russia, throughout the USA including to the Metropolitan Opera and Kennedy Center, as well as to Singapore, Korea, Japan and Turkey. He has conducted performances of The Nutcracker at the Royal Opera House, Covent Garden and other work for the Royal Ballet has included Giselle, Manon, Romeo and Juliet and Swan Lake. He has also worked for the Finnish National Opera, conducting Kenneth Greve’s new production of Swan Lake, Cinderella for Scottish Ballet, Romeo and Juliet for Northern Ballet Theatre, a gala performance with Anastasia Volochkova at Sadler’s Wells and this season conducted a production of The Nutcracker for the Norwegian National Opera in Oslo.

He is Music Director of the Kingston Philharmonia and conductor of Surrey Youth Orchestra and has recently been appointed to the Conducting Faculty of the Royal Academy of Music in London.