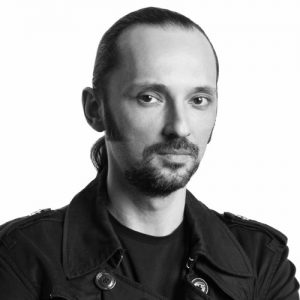 Bohdan Sehin was born in 1976 in Western Ukraine.
A composer and project coordinator, Bohdan Sehin graduated from the Lviv Lysenko National Music Academy, and has studied composition with M. Skoryk. He took compositional advice from A. Pärt, B. Furrer, A. Shchetynsky, Y. Shaked. He has been a two-time participant (2003, 2006) in the Gaude Polonia scholarship program sponsored by the Polish Ministry of Culture and has studied composition with Zb. Bujarski in Krakow and Z. Krauze in Warsaw; a scholarship recipient of the Warsaw Autumn Friends Foundation (2003); and a Gulliver Connect (2008), and Ukrainian Presidential (2008-2010) grant recipient. He has composed works commissioned by Institute of Music and Dance of Poland (under the program “Collections” – the priority “Composition Commissions”) and Polish Institute in Kyiv. Multiple awards for both composition and theatrical work in Ukraine and Poland. Featuring symphonic, choral, and chamber works, as well as music for theatrical productions, Sehin’s work has been performed for audiences in Belarus, Armenia, Lithuania, Russia, Poland, France, Switzerland, Germany, China and certainly in Ukraine.

Sehin is a member of the Ukrainian National Composers Union with broad experience in arts-festival management, including the Contrasts International Contemporary Music Festival (Lviv, 1998-2006), Velvet Curtain (Lviv, 2006), Kyiv Music Fest (Kyiv, 2009), and the International Music of Youth Forum (Kiev, 2009, 2011, 2013).
Beginning in 2009, Bohdan has worked on a number of projects in Ukraine. 2009 was also the year when he began coordinating projects for the Ensemble Nostri Temporis (www.entmusic.org), becoming its director the following year. Founder and artistic director of the first in Ukraine the International Master Classes of New Music COURSE (taking place every year since 2012; http://imcnmcourse.wix.com/course) and Ukrainian Biennale for New Music (http://biennale.entmusic.org/en/). From 2012 he is the commercial director for the new music development of Lviv Philharmonic Society and executive director of the Contrasts International Contemporary Music Festival (http://contrastsfestival.wixsite.com/contrastsfestival).