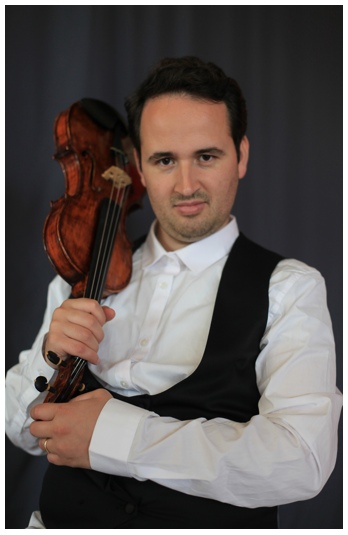 Kosovo violinist, Dardan Osmanaj born in 1985, was the youngest member of the Kosovo Philharmonic Orchestra at age 16 years old. He finished his studies at the Academy of Music in Tirana (Albania). Besides concerts as soloist and chamber music he was and professor at the music school “freckled Jakova” in Prishtina. He has been invited to many festivals in the country as DAM festival, KamerFest, REMUSICA, etc. He has been invited as a member of the first violinist of the Chamber Orchestra of Tirana, National Opera and Radio Television Symphony Orchestra. As soloist with the orchestra of the Academy of Music in Tirana played a concert for two violins by Johan Sebastian Bach, Mozart A dur. He is the founder of Albanian Camerata, a super attractive orchestra which plays without a conductor. He collaborates with the American pianist Scott Faigen, where in 2014 they brought for the first time in Tirana interpretation of the Sonata for violin and piano by Richard Strauss. Since 2010 is a violin professor at the school “TALENTI” Durres. He plays with violin moderrne by Ervin Gjoni ( Guarneri model).